I am surrounded by people
of dazzling brilliance , beauty and mind
Sometimes they are in the room in my face
Sometimes we interact digitally online

I would never be so cunning
So sharp, astute and yet so polite
I feel sometimes like a little cave man
who has stumbled upon the first artificial light

so mediocre and such a medium ochre
my shining shall be twinkly winkly so-s0
it was a blast and atleast we tried
played ,laughed ,partied then died.

Asked whether open source BI and data integration software from the likes of Jaspersoft, Pentaho and Talend is a growing threat, [Goodnight] said: “We haven’t noticed that a lot. Most of our companies need industrial strength software that has been tested, put through every possible scenario or failure to make sure everything works correctly.”

and the Pentaho follow-up reaction is here

From Merv Adrian-‘s excellent article on market shares in BI

so whats the performance of Talend, Pentaho and Jaspersoft

It seems that Talend’s revenue was somewhat shy of $10 million in 2008.

and Talend itself says

and for Pentaho numbers-

suggest it is still in early stages.

So what do we conclude-

1) There is a complete lack of transparency in open source BI market shares as almost all these companies are privately held and do not disclose revenues.

2) What may be a pure play open source company may actually be a company funded by a big BI vendor (like Revolution Analytics is funded among others by Intel-Microsoft) and EnterpriseDB has IBM as an investor.MySQL and Sun of course are bought by Oracle

The degree of control by proprietary vendors on open source vendors is still not disclosed- whether they are holding a stake for strategic reasons or otherwise.

3) None of the Open Source Vendors are even close to a 1 Billion dollar revenue number.

Jim Goodnight is pointing out market reality when he says he has not seen much impact (in terms of market share). As for the rest of his remarks, well he’s got a job to do as CEO and thats talk up his company and trash the competition- which he as been doing for 3 decades and unlikely to change now unless there is severe market share impact. Unless you expect him to notice companies less than 5% of his size in revenue.

If you use Windows for your stats computing and your data is in a database (probably true for almost all corporate business analysts) R 2.12 has provided a unique procedural hitch for you NO BINARIES for packages used till now to read from these databases.

The Readme notes of the release say-

So how to connect to PostgreSQL and MySQL databases.

You can update your PostgreSQL databases here-

Fortunately the RpgSQL package is still available for PostgreSQL

Coming back to R and noting the name of my PostgreSQL DSN from above screenshot-( If not there just click on add-scroll to appropriate database -here PostgreSQL and click on Finish- add in the default values for your database or your own created database values-see screenshot for help with other configuring- and remember to click Test below to check if username and password are working, port is correct etc. 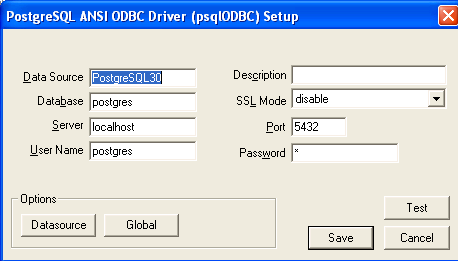 Now for MySQL databases it is exactly the same code except we download and install the ODBC driver from http://www.mysql.com/downloads/connector/odbc/

and then we run the same configuring DSN as we did for postgreSQL.

After that we use RODBC in pretty much the same way except changing for the default username and password for MySQL and changing the DSN name for the previous step.

While using RODBC for all databases is a welcome step, perhaps the change release notes for Window Users of R may need to be more substantiative than one given for R 2.12.2

As per me, I snagged some “new”stuff in this release-

That’s right- that is incorporating the work of our favorite professor from R Project himself- http://biostat.mc.vanderbilt.edu/wiki/Main/FrankHarrell

Apparently Prof Frank E was quite a SAS coder himself (see http://biostat.mc.vanderbilt.edu/wiki/Main/SasMacros)

Back to JMP Genomics 5-

• Tools for R programmers to build and package user interfaces that let them share customized R analytics with a broader audience.•

A new add-in infrastructure that simplifies the integration of external analytics into JMP.

+ For people in life sciences who like new stats software you can also download a trial version of IPA here at http://www.ingenuity.com/products/IPA/Free-Trial-Software.html

From http://www.math.yorku.ca/SCS/Gallery/ a great selection

March of the Pies

and the renowned best graph ever

and the most lieing factor or distorted graph

Below are the highlights of AWS’s new free usage tiers. All are available for one year (except Amazon SimpleDB, SQS, and SNS which are free indefinitely):

In addition to these services, the AWS Management Console is available at no charge to help you build and manage your application on AWS.

* These free tiers are only available to new AWS customers and are available for 12 months following your AWSsign-up date. When your free usage expires or if your application use exceeds the free usage tiers, you simply pay standard, pay-as-you-go service rates (see each service page for full pricing details). Restrictions apply; see offer terms for more details.

** These free tiers do not expire after 12 months and are available to both existing and new AWS customers indefinitely.

The new AWS free usage tier applies to participating services across all AWS regions: US – N. Virginia, US – N. California, EU – Ireland, and APAC – Singapore. Your free usage is calculated each month across all regions and automatically applied to your bill – free usage does not accumulate.

however Bob Muenchen of http://www.r4stats.com/ was helpful to point out that the Epack Plugin provides time series functionality to R Commander.

Of course , if I was the sales manager for SAS ETS I would be worried given the increasing capabilities in Time Series in R. But then again some deficiencies in R GUI for Time Series-

1) Layout is not very elegant