Email from Springer to me-

We trust you are as enthusiastic about this opportunity to distribute your book as we are.

The publisher of the translation is: Xi’an Jiaotong University Press.

The financial conditions we agreed upon are:
A flat fee of EUR XXXX  for 3,000 copies, payable upon conclusion of the agreement but not later than 60 days thereafter. (Please note that this fee is subject to tax deductions of 15.77%, imposed by the licensee’s country.)

Upon receiving the payment, we will ask our accounts department to transfer your shares to you, according to your contract with Springer. The share will then be shown on the next royalty statement you’ll receive.

Upon publication you would receive 4 complimentary copies.

In case you have further questions, please do not hesitate to contact us.

For the book in English- see right margin!

The dichotomy in being a writer on open source with a non-open access publisher?

But the publisher is the most reputed in this field. So what are my choices? How do I get more people to have choices to read books.

Take open knowledge , curate it, and turn it behind a $50 paywall. I am sorry, Aaron. People like me are the reason ……

This is a fairly concise collection on how to write a technical book. It may seem arrogant for a 1- book author like me to do so, but I get a lot of queries on this and it seems there is a fair amount of information asymmetry on this process.  I have experience with getting rejected and accepted in both creative and technology domains, but I will make this post fairly tech specific.

Well they don’t like unsolicited manuscripts from total unknowns. This is also very domain specific. If you are writing a novel, or a poetry book, or a technical book, approval rates will depend on current interest in that domain.

Advice– If you are first time author to be, choose your niche domain as one which you are passionate about and which has been generating some buzz lately. It could be Python, D3, R etc.

No, they don’t make that much money compared to a Hollywood studio. Yes, books are expensive, but they basically are funding a whole supply chain that may or may not be efficient. Your book is subsidizing all the books that didn’t sell. Proof reading, and editing are not very glamorous jobs, but they take a long time, and are expensive. I have much more respect for editors now than say 3 years ago. The ultimate in supply chain efficiency would be if each and every hard copy was printed on demand, and each and every soft copy was priced efficiently given pricing elasticity. Pricing analytics on dynamic book pricing (like on Amazon)— hmm

You would be lucky to get more than 14% from a gross selling price of a hard copy or more than 40% of an electronic book. You want to make money, dont write technical books, write white papers and make webinars.

You don’t make money by writing a technical book, but your branding does go up significantly, and you can now charge for training, webinars, talks, conferences, white papers, articles. These alternatives can help you survive.

THAT guy wrote a great proposal, spent time building his brand, and wrote interesting stuff. Publishers like to sell books, not ideas.Writer jealousy and insecurity are part of the game – you have a limited amount of energy in a day- spend that writing or spend that reading. Ideally do both.

1) Proposal- Write an awesome proposal. Take tips from the publisher website. Choose which publisher is more interested in publishing the topic (hint- go to all the websites) . Those publisher websites confusing you yet- jump to the FAQ.

Some publishers I think relevant to technical books-

2) Manuscript- Write daily . 300 words. 300 times. Thats a manuscript. It is tough for people like us. Hemingway had  it easy. I used a Latex GUI called Lyx for writing http://www.lyx.org/. You may choose your own tool, style, time of day /night, cafe , room to spur your creative juices.

3) Editing- you will edit, chop, re edit and rewrite a book many times. It is ok. Make it readable is my advice. Try and think of a non technical person and try and explain your book to clear your ideas.

Once your proposal is accepted, you sign a contract for royalty and copyright.

Once the contract is signed you write the manuscript.This also involves a fair amount of research, citations, folder management , to keep your book figures, your citations ready. I generally write the citation then and there within the book, and then organize them later chapter by chapter. Un-cited work leads to charges of plagiarism which is the buzz kill for any author. Write, Cite, Rewrite.

You will also need to create index (can be done by software) so people can navigate the book better , and appendix for hiding all the stuff you couldn’t leave behind.

Once you submit the manuscript ,you choose the cover, discuss the rewrites with editor, edit the changes suggested, and resend the manuscript files, count till six months for publication. Send copies to people you like who can help spread the word on your book. Wait for reviews, engage with positivity with everyone, then wait for sales figures. Congrats- you are a writer now!

Here is an interview with Prof Rob J Hyndman who has created many time series forecasting methods and authored books as well as R packages on the same.

Probably the biggest impact I’ve had is in helping the Australian government forecast the national health budget. In 2001 and 2002, they had underestimated health expenditure by nearly $1 billion in each year which is a lot of money to have to find, even for a national government. I was invited to assist them in developing a new forecasting method, which I did. The new method has forecast errors of the order of plus or minus $50 million which is much more manageable. The method I developed for them was the basis of the ETS models discussed in my 2008 book on exponential smoothing (www.exponentialsmoothing.net)

. And now anyone can use the method with the ets() function in the forecast package for R.
About-
Rob J Hyndman is Pro­fessor of Stat­ist­ics in the Depart­ment of Eco­no­met­rics and Busi­ness Stat­ist­ics at Mon­ash Uni­ver­sity and Dir­ector of the Mon­ash Uni­ver­sity Busi­ness & Eco­nomic Fore­cast­ing Unit. He is also Editor-in-Chief of the Inter­na­tional Journal of Fore­cast­ing and a Dir­ector of the Inter­na­tional Insti­tute of Fore­casters. Rob is the author of over 100 research papers in stat­ist­ical sci­ence. In 2007, he received the Moran medal from the Aus­tralian Academy of Sci­ence for his con­tri­bu­tions to stat­ist­ical research, espe­cially in the area of stat­ist­ical fore­cast­ing. For 25 years, Rob has main­tained an act­ive con­sult­ing prac­tice, assist­ing hun­dreds of com­pan­ies and organ­iz­a­tions. His recent con­sult­ing work has involved fore­cast­ing elec­tri­city demand, tour­ism demand, the Aus­tralian gov­ern­ment health budget and case volume at a US call centre.

I liked the new features in PiCloud , which is a cloud computing way to use Python. Python is increasingly popular as a computational language, and the cloud is the way where HW is headed to atleast as of 2011-12

The new features allows you to publish your own functions as urls.

By publishing your Python functions to URLs. Why would you want to publish a function?

Here’s a peek at the interface:

You publish a Python function

We give you a URL Back

It certainly is an interesting development and I am wondering how other languages can adopt this paradigm as well.
For R, as of now http://www.cloudnumbers.com/ seems to be the only player in the cloud.
It would be exciting to see more players in the cloud statistical analytical space.

From Wikipedia, the free encyclopedia

Tukey was born in New Bedford, Massachusetts in 1915, and obtained a B.A. in 1936 and M.Sc.in 1937, in chemistry, from Brown University, before moving to Princeton University where he received a Ph.D. in mathematics.[2]

During World War II, Tukey worked at the Fire Control Research Office and collaborated withSamuel Wilks and William Cochran. After the war, he returned to Princeton, dividing his time between the university and AT&T Bell Laboratories.

He was awarded the IEEE Medal of Honor in 1982 “For his contributions to the spectral analysis of random processes and the fast Fourier transform (FFT) algorithm.”

His statistical interests were many and varied. He is particularly remembered for his development with James Cooley of the Cooley–Tukey FFT algorithm. In 1970, he contributed significantly to what is today known as the jackknife estimation—also termed Quenouille-Tukey jackknife. He introduced the box plot in his 1977 book,”Exploratory Data Analysis“.

Tukey’s range test, the Tukey lambda distribution, Tukey’s test of additivity and Tukey’s lemma all bear his name. He is also the creator of several little-known methods such as the trimean andmedian-median line, an easier alternative to linear regression.

In 1974, he developed, with Jerome H. Friedman, the concept of the projection pursuit.[3]

Sir Ronald Aylmer Fisher FRS (17 February 1890 – 29 July 1962) was an English statistician,evolutionary biologist, eugenicist and geneticist. Among other things, Fisher is well known for his contributions to statistics by creating Fisher’s exact test and Fisher’s equation. Anders Hald called him “a genius who almost single-handedly created the foundations for modern statistical science”[1] while Richard Dawkins named him “the greatest biologist since Darwin“.[2]

William Sealy Gosset (June 13, 1876–October 16, 1937) is famous as a statistician, best known by his pen name Student and for his work on Student’s t-distribution.

Born in Canterbury, England to Agnes Sealy Vidal and Colonel Frederic Gosset, Gosset attendedWinchester College before reading chemistry and mathematics at New College, Oxford. On graduating in 1899, he joined the Dublin brewery of Arthur Guinness & Son.

Guinness was a progressive agro-chemical business and Gosset would apply his statistical knowledge both in the brewery and on the farm—to the selection of the best yielding varieties ofbarley. Gosset acquired that knowledge by study, trial and error and by spending two terms in 1906–7 in the biometric laboratory of Karl Pearson. Gosset and Pearson had a good relationship and Pearson helped Gosset with the mathematics of his papers. Pearson helped with the 1908 papers but he had little appreciation of their importance. The papers addressed the brewer’s concern with small samples, while the biometrician typically had hundreds of observations and saw no urgency in developing small-sample methods.

Another researcher at Guinness had previously published a paper containing trade secrets of the Guinness brewery. To prevent further disclosure of confidential information, Guinness prohibited its employees from publishing any papers regardless of the contained information. However, after pleading with the brewery and explaining that his mathematical and philosophical conclusions were of no possible practical use to competing brewers, he was allowed to publish them, but under a pseudonym (“Student”), to avoid difficulties with the rest of the staff.[1] Thus his most famous achievement is now referred to as Student’s t-distribution, which might otherwise have been Gosset’s t-distribution.

I just discovered Fusion Tables. There is life beyond the amazing Jeff’s Amazon Ec2/s3 after all!

What can I do with Google Fusion Tables?

Import your own data
Upload data tables from spreadsheets or CSV files, even KML. Developers can use the Fusion Tables API to insert, update, delete and query data programmatically. You can export your data as CSV or KML too.

Visualize it instantly
See the data on a map or as a chart immediately. Use filters for more selective visualizations.

Publish your visualization on other web properties
Now that you’ve got that nice map or chart of your data, you can embed it in a web page or blog post. Or send a link by email or IM. It will always display the latest data values from your table and helps you communicate your story more easily. 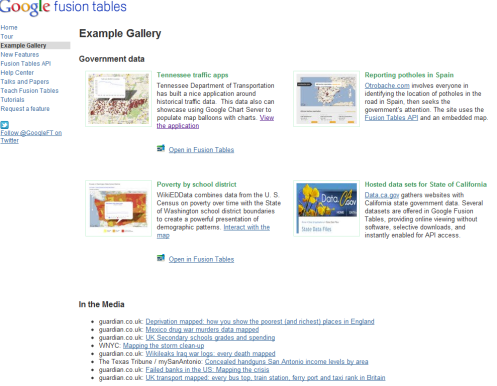 If you are worried about data.gov closing down, heres a snapshot of Fusion Table Public datasets.