Then I searched for

wouldnt they save time, bandwidth and storage if they just show 3 pages for every search result and give more than 3 pages only for Advanced Search.

becuase it is ranked 3 places higher than his own blog http://too.blogspot.com/

Larry Page was Google’s founding CEO and grew the company to more than 200 employees and profitability before moving into his role as president of products in April 2001. He continues to share responsibility for Google’s day-to-day operations with Eric Schmidt and Sergey Brin.

The son of Michigan State University computer science professor Dr. Carl Victor Page, Larry’s love of computers began at age six. While following in his father’s footsteps in academics, he became an honors graduate from the University of Michigan, where he earned a bachelor’s degree in engineering, with a concentration on computer engineering. During his time in Ann Arbor, Larry built an inkjet printer out of Lego™ bricks.

While in the Ph.D. program in computer science at Stanford University, Larry met Sergey Brin, and together they developed and ran Google, which began operating in 1998. Larry went on leave from Stanford after earning his master’s degree.

In 2002, Larry was named a World Economic Forum Global Leader for Tomorrow. He is a member of the National Advisory Committee (NAC) of the University of Michigan College of Engineering, and together with co-founder Sergey Brin, Larry was honored with the Marconi Prize in 2004. He is a trustee on the board of the X PRIZE, and was elected to the National Academy of Engineering in 2004.

and no coincidence but it reminded me of the Metallica video- Turn the Page. Forgive the Pun, herr Eric

Some slideshare.net presentations I really liked.

A tutorial on SEO and SEM-

Carole, We are waiting for the sequel on  analytics on football and the beer game.

Slideshare is a great VISUAL interface on sharing content. I liked Google Docs embedding as well, but Matt Mullenberg and Matt Cutts seemed to have stopped talking. Mullenberg is going like Zuckenberg, not willing to align with Sergey Mikhaylovich Brin. or maybe they are afraid of Big Brother Brin. Google loves Java and Javascript (even when they are getting sued for it)- while Matt M  hates it- bad for RIA I guess.

Scribd also is a great way to share content- and probably is small enough for. WordPress.com to allow embedding

Thats the reason why I sometimes prefer Scribd for sharing my poetry to Slideshare and Google Docs. Also I like the enhanced analytics and the much easier and evolved interface for reading. Slideshare is much more successful than Scribd because it is open to sharing with everyone- scribd tries to get you to register …;)

View this document on Scribd

(*BECAUSE GOOGLE IS NOT A  MONOPOLY )

Basically it allows you to use a background song over your home videos.

If you have ever shot a baby video, or a pet video, or just a random nature is beautiful video- here is an example

The Heavy Rock ( California) vs The Country Song ( Tennessee) versions.

They were both sent from my Iphone, and the audio added later. The Audio swap function is at-

Click on the Audio Swap Button below each video.

You can see the screenshot below for the functionality offered by Audio Swap.

The YouTube feature also has considerable refinements ( after 5 yrs of hard thinking by the most famous Standford alumni to drop out). An example is customizable skins and themes- see here a screenshot ( note the background color, font etc)-

You can also see it here at http://youtube.com/Decisionstats or just click the screenshot below. 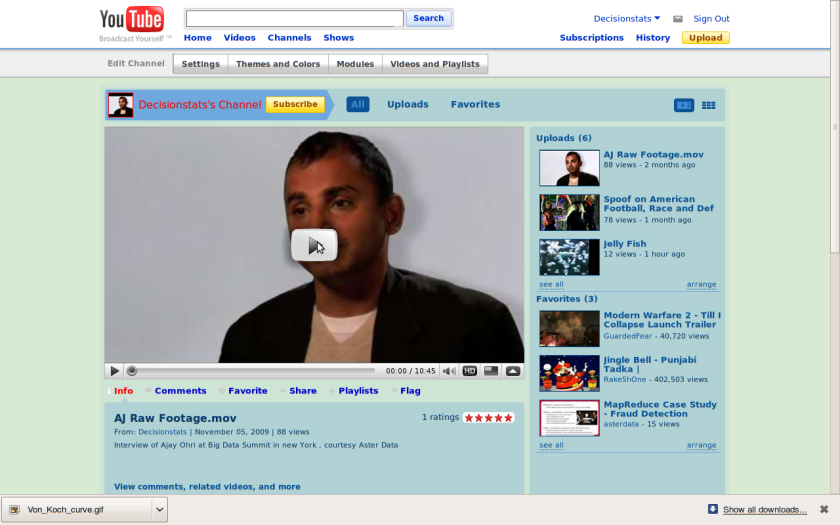 Speaking of Stanford- I called up home in India to tell them how I am doing in San Fran. There was considerable confusion after I told them that I got admitted to Stanford. My father said- ” Just how did you get admitted to Stanford? ” Me- I just took the Caltrain to the station- I meant admitted to the campus not the college 😉

Google has launched support for Droid the mobile operating system but forgot to include support for their own browser- Chromium. Atleast if you can support Windows Explorer and Firefox for Gears, surely you can add support for Gears for Chromium.Maybe with an Ad or two 😉 .Since Al Gore invented the internet and he sits as a consultant for the California boys, maybe he can advise them as well on the anti trust investigations with Apple (cough).

Our favorite drop outs from the Phd Program just learned that they should not moon the giant. The company founded in Paul Allen building at Stanford, also known as Gogol /Google announced they would create a Cloud OS with much fan fare. Only to find their own cloud prodocutivity offering Google Docs bested by Slideshare.

Now you can import your Gmail attachments Google docs into slideshare, for much better professional sharing within your office.

Here is an embedded SlideShare ppt called Google Hacks, note the much better visual appeal in this vis a vis your Google Docs.

Well as for the Stanford dropouts this is what happens when you dont complete your Phd education.

As per Cloud Computing and Office productivity goes,

Unless Google creates a cloud version of Open Office- but who needs that anyway?

Google Hacks
View more documents from rickdog.
Disclaimer- The author uses Google Docs extensively. If you are from Google. Please do not block his Gmail id , guys.
Academic Disclaimer-The author intends to complete his Phd. these are his personal views only.

Here are some of the top articles by way of views, in an  area I love– of modeling and text mining.

Karl produces one of the most respected surveys that captures emerging trends in data mining and technology. Karl was also one of the most enthusiastic people I have interviewed- and I am thankful for his help in getting me some more interviews.

One of the earliest and easily the best Knowledge Discoverer of all times, Gregory produces http://www.kdnuggets.com and the newsletter is easily the must newsletter to be on. Gregory was doing data mining , while the Google boys were still debating whether to drop out of Stanford or not.
END_OF_DOCUMENT_TOKEN_TO_BE_REPLACED