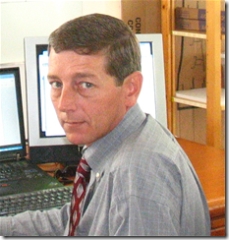 Ajay- Describe your career  journey from not finishing college to writing software to your present projects?
Rob- I joined the Navy right out of High School. I had neither the money for college, or a real desire for it. I had several roles in the Navy, to include a Combat Medic station with the US Marine Corps and eventually becoming a Neonatal Respiratory Therapist.

After the Navy I worked as a Respiratory Therapist, a roofer, and I repaired print shop equipment. Basically whatever it took to make a buck or two.  Eventually I started selling computers.  That led me to running a multi-line dial-up BBS and I taught myself how to program.  Eventually that led to a job with a small engineering company where we developed WiFi.

After the WiFi project I started consulting on my own.  I used Rackspace to host my clients, and eventually they hired me.  I’ve been here almost three years and have held several roles. I currently manage Social Media, building 43 and am involved in several other projects such as the Rackspace Startup Program.

Ajay-  What is building43 all about ?
Rob- Building43 is a web site devoted to telling the stories behind technology startups. Basically, after we hired Robert Scoble and Rocky Barbanica we were figuring out how best we could work with them to both highlight Rackspace and customers.  That idea expanded beyond customers to highlighting anyone doing something incredible in the technology industry – mostly software startups.  We’ve had interviews with people like Mark Zuckerberg, CEO and Founder of FaceBook.  We’ve broken some news on the site, but it isn’t really a news site. It is a story telling site.

Rackspace has met some amazing new customers through the relationships that started with an interview.

Ajay-  How is life as Robert Scoble’s boss. Is he an easy guy to work with? Does he have super powers while he types?
Rob- Robert isn’t much different to manage than the rest of my employees. He is a person – no super powers.  But he does establish a unique perspective on things because he gets to see so much new technology early.  Often earlier than almost anyone else. It helps him to spot trends that others might not be seeing yet.
Ajay – Hosting companies are so so many. What makes Rackspace special for different kinds of customers?
Rob- I think what we do better than anyone is add that human touch – the people really care about your business.  We are a company that is focused on building one of the greatest service companies on the planet.  We sell support.  Hosting is secondary to service. Our motto is Fanatic Support®

and we actually look for people focused on delivering amazing customer experiences during our interviewing and hiring practices. People that find a personal sense of pride and reward by helping others should apply at
Rackspace.  We are hiring like crazy!

Ajay – Where do you see technology and the internet 5 years down the line? (we will visit the answers in 5 years 🙂 )?
Rob- I think the shift to Cloud computing is going to be dramatic.  I think in five years we will be much further down that path.  The scaling, cost-effectiveness, and on-demand nature of the Cloud are just too compelling for companies not to embrace. This changes business in fundamental ways – lower capital expenses, no need for in house IT staff, etc will save companies a lot of money and let them focus more on their core businesses. Computing will become another utility.  I also think mobile use of computing will be much more common than it is today.  And it is VERY common today.  Phones will replace car keys and credit cards (they already are). This too will drive use of Cloud computing  because we all want our data wherever we are – on whatever computing device we happen tobe using.
Ajay- GoDaddy CEO shoots elephants. What do you do in your  spare time, if any.
Rob- Well, I don’t hunt.  We do shoot a lot of video though! I enjoy playing poker, specifically Texas Hold ’em.  It is a very people oriented game, and people are my passion.

Brief Biography- (in his own words from http://www.lagesse.org/about/)

My technical background includes working on the development of WiFi, writing wireless applications for the Apple Newton, mentoring/managing several software-based start-ups, running software quality assurance teams and more. In 2008 I joined Rackspace as an employee – a “Racker”.  I was previously a 7 year customer and the company impressed me. My initial role was as Director of Software Development for the Rackspace Cloud.  It was soon evident that I was better suited to a customer facing role since I LOVE talking to customers. I am currently the Director of Customer Development Chief Disruption Officer.  I manage building43 and enjoy working with Robert Scoble and Rocky Barbanica to make that happen.  The org chart says they work for me.  Reality tells me the opposite

Go take a look – I’m proud of what we are building there (pardon the pun!).

I do a lot of other stuff at Rackspace – mostly because they let me!  I love a company that lets me try. Rackspace does that.Going further back, I have been a Mayor (in Hawaii). I have written successful shareware software. I have managed employees all over the world. I have been all over the world. I have also done roofing, repaired high end print-shop equipment, been a Neonatal Respiratory Therapist, done CPR on a boat, in a plane, and in a hardware store (and of course in hospitals).

I have treated jumpers from the Golden Gate Bridge – and helped save a few. I have lived in Illinois (Kankakee), California (San Diego, San Francisco and Novato), Texas (Corpus Christi and San Antonio), Florida (Pensacola and Palm Bay), Hawaii (Honolulu/Fort Shafter) and several other places for shorter durations.

For the last 8+ years I have been a single parent – and have done an amazing job (yes, I am a proud papa) thanks to having great kids.  They are both in College now – something I did NOT manage to accomplish. I love doing anything someone thinks I am not qualified to do.

I can be contacted at rob (at) lagesse (dot) org