I created a list of questions and answers I have seen for data science interviews. Since everyone claims to be an expert in data science, let me assure I am obediently learning new things with bemused humility after 12 years.

Background– I have been working into analytics since February 2004. From 2004 to 2007 I worked only in SAS language. From 2008 onwards I started working with R and SAS languages. From 2013 I started working with Python. Since around 2009, we had a term called Big Data thanks to Hadoop and since 2013 we had a term called data science. What used to be called just analytics is now called data science, with added variants of Big Data Analytics and Business Analytics to refer to the same. For techniques in building models, we have used the terms predictive analytics, data mining and machine learning to mean roughy the same thing ( but actually they might be different). I had a MBA for business training and have written two books on R by now. I am currently writing my third book but on Python for Wiley.
During this journey I have taught, trained, mentored hundreds of budding data scientists and also interviewed a few of them, while giving a few interviews myself.  Based on this experience, here are a few questions to help you clear an entry level interview for data science roles and become data scientists.  Since data science itself is an intersection of business perspective, statistics and coding, I have accordingly labeled them in specific sections. This will not give you a sure shot chance of clearing an interview but learning a few of these questions and answers will definitely help increase the probability of you clearing the interview process.

Edureka remains one of the true believers in customer centered online education without fooling young people of too much money, by a mass market, mass course approach with actual teacher student interaction than the cold robotic automation of MOOCs. 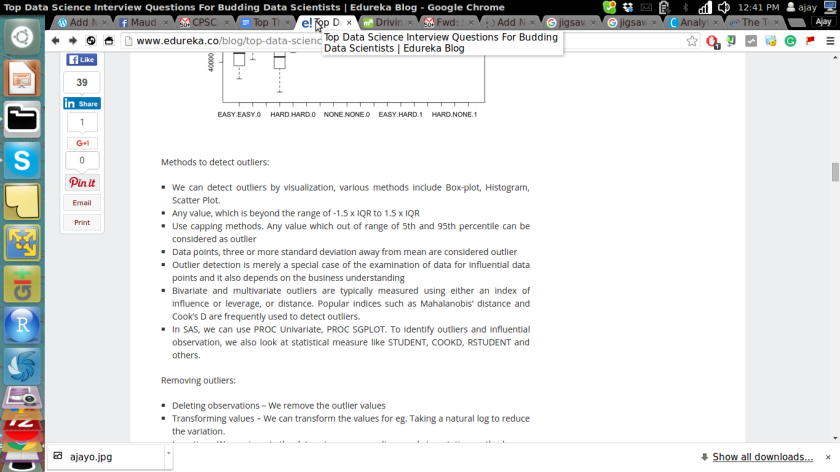