During my stay in Hauz Khas Village I used to come into contact almost on a daily basis with fashion models. I had friends in the business both on the designer and on the modeling side. Ok my friends were not so big, and I never got no party tickets. Who has time to party when one is writing a blog? Work-life balance for a blogger is just sleep-shit-eat-write-read-think-procrastinate-sleep.

Fashion models have a tough profession. They are expected to be nice else they are a bitch or a brat. There are more catty bitches and more bratty snitches in the fashion business than in a movie on Whitey Bulger. Fashion models are expected to be thin. Smoking cigarettes and drugs helps them stay that way. But in the public they will say they were born to be thin. They attend amazing parties with amazing free food but are not expected to eat or swallow more than a morsel or two. Fashion models have a short shelf life and get not much respect in the unfair game of life.

Role models used to be sportsmen like Joe Dimaggio, Jackie Robinson , Kapil Dev and Tendulkar. Tendulkar who? Don’t do that Russian roulette? it will give you tennis elbow in the chin. Ok, ok. Tendulkar just is the man who made the largest number of runs in cricket. Think Babe Ruth multiplied by 20 in statistics and divided by 5 in terms of appearance and size. Role models used to be businessmen who gave jobs. Role models used to politicians who actually wrote the speeches they were going to say and actually kicked bureaucrats to do the work the politicians promised in their speech. Remember Kennedy and the moon shot speech. Now thats a role model for me and Happy Birthday to you Mr President. My role models were Charles Dickens who wrote himself to death and Churchill who won the Nobel Prize for Literature after winning the World War and turning down the Dukedom of London. Churchill before Sartre turned down the Nobel, when Brando still accepted Oscars, when Ike was still building and not talking about the mil-ind complex and Churchill a few years away from the crazy last years and the truth on how we overlooked a few things like genocide, famine, holocausts in his quests for Anglo Saxon supremacy. Churchill was my role model because he could write his own speeches and get his team deliver on those speeches.

Role models for the next generation are who made the quickest billion in technology, who dated the most in the least time in acting and no politician makes the role model list unless you wanted to be a politician yourself. Paris Hilton gave us a night in Paris, Kim Kardashian who gets invited to the Presidents dinner with journalists, Olympic medallists and hacker snitches like BradleyManning,Snowden and the rappers dating J Lo are the role models of the next generation.

The nerds, the geeks, the quants, the scientists rebelled against this and made their own models. Their regression models helped the money bags sell the right kind of ad on the best kind of content so the middle of the intelligence curve sheep can keep spending money in debt in debt in debt.

Fashion models look good but are broke. Regression models make you rich but can get ugly. Role models are the ones that help you balance your needs with your greeds, with your hunger and ambition to look good and look glorious and your enduring need to balance your energy with long term non-burnout success.

Lieutenant Colonel Mahmood Kan Durrani who was an Australian prisoner of the Japanese quotes a lecture given by a Japanese officer on how leaflets should be prepared. One of his six recommendations was:

“The leaflet should have, if possible, the picture of a beautiful woman, after the method used by the Germans in the First World War. This device would insure that the soldier would be attracted and would be unable to resist looking at the picture over and over again. This would rouse his passion, and his heart would be inclined for love and to hate fighting.”
– Sex and Psychological Operations by Herbert A. Friedman 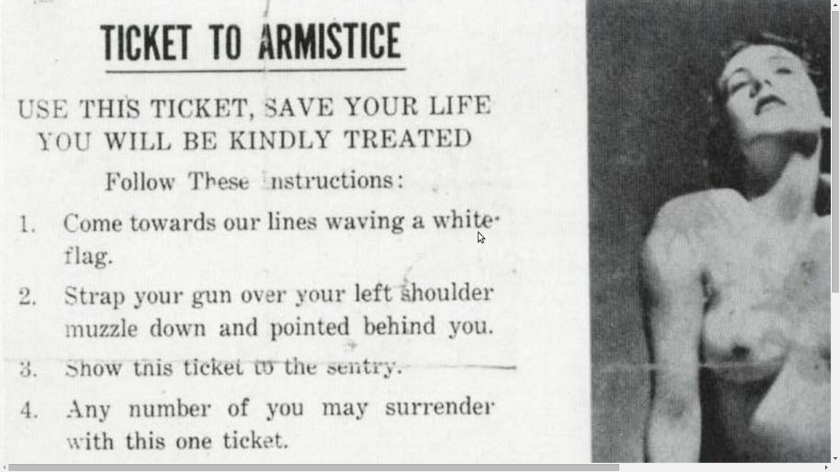