Over the past few years I have chosen a few tools primarily driven from Psychology to help me manage complex scenarios, difficult clients and problematic questions. The reason for this is quite simple, data science especially predictive analytics is trying to mimic or predict human behavior which is inherently irrational and driven by impulse or need fulfillment. However when human behavior is aggregated as well as segregated we can predict it but for short periods of time after which predictive models decay. 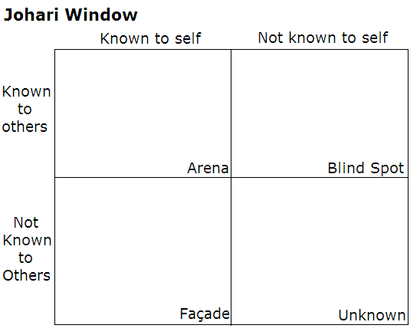 philosopher Charles Handy calls this concept the Johari House with four rooms. Room 1 is the part of ourselves that we see and others see. Room 2 is the aspects that others see but we are not aware of. Room 4 is the most mysterious room in that the unconscious or subconscious part of us is seen by neither ourselves nor others. Room 3 is our private space, which we know but keep from others.

Open or Arena: Adjectives that are selected by both the participant and his or her peers are placed into the Open or Arenaquadrant. This quadrant represents traits of the subjects that both they and their peers are aware of.

Blind : Adjectives that are not selected by subjects but only by their peers are placed into the Blind Spot quadrant. These represent information that the subject is not aware of, but others are, and they can decide whether and how to inform the individual about these “blind spots“.

Maslow used the terms “physiological”, “safety”, “belongingness” and “love”, “esteem”, “self-actualization”, and “self-transcendence” to describe the pattern that human motivations generally move through.

The principal–agent problem (also known as agency dilemma or theory of agency) occurs when one person or entity (the “agent“) is able to make decisions on behalf of, or that impact, another person or entity: the “principal“. The dilemma exists because sometimes the agent is motivated to act in his own best interests rather than those of the principal. The agent-principal relationship is a useful analytic tool in political science and economics, but may also apply to other areas.

Common examples of this relationship include corporate management (agent) and shareholders (principal), or politicians (agent) and voters (principal).[1] For another example, consider a dental patient (the principal) wondering whether his dentist (the agent) is recommending expensive treatment because it is truly necessary for the patient’s dental health, or because it will generate income for the dentist.

4) Culture of an organization -It changes with time. This graph helps me understand

Cognitive biases are tendencies to think in certain ways that can lead to systematic deviations from a standard of rationality or good judgment, and are often studied in psychology and behavioral economics.

Among the “cold” biases,

6) Logical Fallacies- To quickly separate signal from human generated noise or arguments, I wish there was a machine learning algorithm to detect logical fallacies  in NLTP.

There are four ways of making someone to do a task, stated as “Saam, Daam, Dand & Bhed”. This sutra by Acharya Chanakya is used worldwide. why? It works and is highly practical. It means:

Apart from these I also use some seven strategy models for actually understanding business . I learnt in Business School- they are here in quasi -graphical easy to understand format